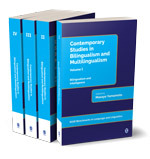 The epoch-making advancement in bilingualism was made in 1962, when Peal and Lambert concluded that bilingual children did much better than monolingual children on both verbal and nonverbal intelligence tests. Much progress has been achieved since then, due to advances in research technology and the increasing number of people speaking a wider variety of languages.  Furthermore, the field itself has expanded, as new frontiers of investigation have been explored, including the bilingualism of languages in different modes, such as spoken/signed bilingualism.  This Major Work builds upon the previous work in the field and extensively covers the recent developments.