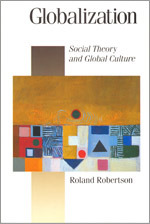 This perspective considers the world as a whole, going beyond conventional distinctions between the global and the local and between the universal and the particular. Its cultural approach emphasizes the political and economic significance of shifting conceptions of, and forms of participation in, an increasingly compressed world. At the same time the book shows why culture has become a globally contested issue - why, for example, competing conceptions of 'world order' have political and economic consequences.

Globalization as a Problem
The Cultural Turn
Mapping the Global Condition
World-Systems Theory, Culture and Images of World Power
Japanese Globality and Japanese Religion
The Universalism-Particularism Issue
'Civilization,' Civility and the Civilizing Process
Globalization Theory and Civilization Analysis
Globality, Modernity and the Issue of Postmodernity
Globalization and the Nostalgic Paradigm
'The Search for Fundamentals' in Global Perspective
Concluding Reflections

`Nothing is as practical as a good theory, I was once taught, and those to adhere to this principle should read Globalization. Social Theory and Global Culture. The author is a sociologist with a special

interest in the social function of religion, which colours his analysis . Originally published in 1992 it stresses the relative autonomy of culture but misses the later discussions on the economic globalization,

`This is an ambitious book and a work of prodigious scholarship. Its aim is to reclaim culture for social theory.... this is an essential book' - The Journal of International Communication

`Is a good guide to the `globalization' area... it is head and shoulders above any other text in the area' - Stewart R Clegg, Asia Pacific Business Review

`There is much in this book which is relevant to the contemporary condition which demands critical attention... This is a book which should appeal to a broad sociological readership' - The Journal of Contingencies and Crisis Management

`Robertson's approach to globalization is multidimensional, complex, well-grounded in soicological theory, and centred on culture - so often the stepchild in other approaches. His work on globalization is not nearly as well known as that of Giddens, probably because his articles have been scattered in difficult to find journals. This is remedied by this book, in which the common theme of globaliztion is developed in relation to such concerns as the cultural turn, world-systems theory, the civilizing process, modernity and postmodernity, nostalgia politics and fundamentalism. Robertson fruitfully contrasts his approach to that of Wallerstein, Elias and Giddens.... his contribution is in several respects original, probes deeply and is highly stimulating' - Political Studies

`Enormously fruitful.... impressive.... this volume manages to work very well and provides a good introduction to many of the questions that underlie the phenomenon of globalization while standing as a sustained and stimulating interpretive essay in its own right.... is impressive and highly readable and deserves to be widely read' - International Affairs

`In an era of increasing integration of economies and political systems and, concomitantly, the disintegration of former socialist planned economies, the discussion of global integration and order is timely and important. Robertson's globalization theory attempts to discuss increasing global integration and interpenetration along four main dimensions: internationalization, societalization, indivdualization and humanization. His approach is voluntaristic and neofunctional and is pitched at both micro and macro levels. The world systems perspective, which is an alternative to globalization theory, comes under Robertson's scrutiny, and his critique of this perspective is one of the more sophisticated non-Marxist ones to date... The book's insightful theory can be used to examine macro and micro aspects of the current conditions. Its inherent comprehensive approach would be of interest not only to macrosociologists but also to those studying postmodernity, gender, ethnicity and identity' - Contemporary Sociology

A true classic in the theory of globalization. This is very useful for both getting students to begin to think of globalization critically but also to apply this to aspects of global society, especially culture.

Good book in supporting critical philosohical and social debates on globalisation. I think it will make a come-back as 'global ethics' becomes more popular.