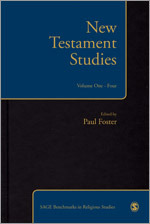 Share
Series:
SAGE Benchmarks in Religious Studies
Other Titles in:
Biblical Studies | Religion (General) | Sociology of Religion
June 2010 | 1 608 pages | SAGE Publications Ltd
Download flyer
New Testament Studies offers a unified approach and a selection of excellent articles that is in no way constrained by theological positions. The aim of this four-volume set is to provide a rich teaching and learning resource which generates a real knowledge transfer based on the best recent New Testament scholarship.

Volume One covers two areas, issues of methodology and recent advances in historical Jesus research. The former area both lays the basic groundwork for engaging in the study of the ancient texts that form the New Testament, but also collects together some of the more creative reading strategies that have been applied to New Testament texts over the last few decades. Further, research into the central figure of the New Testament has a long history, and there has been renewed interest and fresh advances in this area over the last twenty years that have reshaped the questions that are being explored. Volume TwoI looks specifically at the four canonical Gospels. The volume opens with articles that deal with general issues such as questions of genre, audience and purpose before presenting articles that deal with the individual texts. Also the recent application of social-memory theory to Gospel texts will be highlighted. Volume Three perhaps covers the topic that has seen the greatest amount of literature published during the last three decades - the person and letters of Paul the apostle. Three central areas which will be addressed are: (i) the life and self-understanding of Paul; (ii) his theological understandings; and (iii) the purpose of his writings and the issues they raise. Volume Four is not an assembly of disparate voices, but actually reflects one of the most important developments in the study of the New Testament and Early Christianity. Namely, it allows for the appreciation of the diverse expressions of faith that represented the Jesus movement in the first two centuries.

VOLUME 1
The Multivalence of the Term "Original Text" in New Testament Textual Criticism
Eldon J. Epp
Textual Criticism and Theology
David C. Parker
Through a Screen Darkly: Digital texts and the New Testament
David C. Parker
The Origin of the Nomina Sacra: A proposal
Larry W. Hurtado
Recent Advances in Computational Linguistics and their Application to Biblical Studies
J. José Alviar
Postcolonial Biblical Criticism: Taking stock and looking ahead
Fernando F. Segovia
The New Testament and Intercultural Exegesis in Africa
Jean-Claude Loba-Mkole
Methodological Rivalries: Theology and social science in Girardian interpretations of the New Testament
John Dunnill
Eyewitnesses and the Oral Jesus Tradition
James D.G. Dunn
Evangelicals and the Quest for the Historical Jesus
Samuel Lamerson
The Galilee and Jesus in Recent Research
Mark Rapinchuk
Jesus and the Gentiles after Jeremias: Patterns and prospects
Michael F. Bird
Educating Jesus: The search for a plausible context
Paul Foster
Jesus, Judaism and the Covenant
Tom Holmén
The Continuity between John and Jesus
Dale C. Allison
The Circle of the Twelve: Did It exist during Jesus' public ministry?
John P. Meier
The Words of Jesus: From oral traditions to written records in Paul and Q
Harm W. Hollander
The Nazi Quest for an Aryan Jesus
Peter Head
VOLUME 2
The Oxford Conference on the Synoptic Problem
Dan Batovici
Experiments to Develop Criteria for Determining the Existence of Written Sources, and Their Potential Implications for the Synoptic Problem
Robert K. McIver and Marie Carroll
A Century with the Sitz im Leben: From form-critical setting to gospel community and beyond
Samuel Byrskog
The Gospel Community Debate: State of the question
Edward W. Klink, III
Matthew: Apostate, Reformer, Revolutionary?
Donald A. Hagner
Toward a Teleology of Peace: Contesting Matthew's violent eschatology
David J. Neville
Why Did Matthew Get the Shema Wrong? A study of Matthew 22:37
Paul Foster
The Survival of Mark's Gospel: A good story?
Joanna Dewey
Challenged At the Boundaries: a conservative Jesus in Mark's tradition
William Loader
The Narrative Rhetoric of Mark's Ambiguous Characterization of the Disciples
Paul Danove
Evocatio Deorum and the Date of Mark
John S. Kloppenborg
Reading Recent Readings of Issues of Wealth and Poverty in Luke and Acts
Thomas E. Phillips
"Love Your Enemies," the Golden Rule, and Ancient Reciprocity (Luke 6:27-35)
Alan Kirk
Rejecting Violent Judgment: Luke 9:52-56 and its relatives
Dale C. Allison
Historiographical Characteristics of the Gospel of John
Richard Bauckham
Method in Fourth Gospel Studies: A way out of the impasse?
Steve Motyer
Trials, Plots and the Narrative of the Fourth Gospel
Andrew T. Lincoln
The Beloved Disciple as Eyewitness and the Fourth Gospel as Witness
Andrew T. Lincoln
VOLUME 3
The Politics of Interpretation: The rhetoric of race and ethnicity in Paul
Denise Kimber Buell and Caroline Johnson Hodge
The Concept of the 'Inner Human Being' (o` e;sw a;nqrwpoj) in the Anthropology of Paul
Hans Dieter Betz
The Material Spirit: Cosmology and ethics in Paul
Troels Engberg-Pedersen
Asceticism and Christian Identity in Antiquity: A dialogue with Foucault and Paul
Halvor Moxnes
Sex Slaves of Christ: A response to Halvor Moxnes
Jorunn Økland
Asceticism and Christian Identity in Antiquity: A response
John Riches
The Narrative Approach To Paul: An early retrospective
Bruce W. Longenecker
Is Paul's Gospel Narratable?
Richard B. Hays
German-Language Feminist Exegesis of the Pauline Letters: A survey
Luzia Sutter Rehmann
Epistolography, Rhetoric and Letter Prescript: Romans 1.1-7 as a Test Case
Samuel Byrskog
Paul Between Jews and Gentiles in Corinth
Jack T. Sanders
On Becoming the Righteousness of God: Another look at 2 cor 5:21
Morna D. Hooker
The Incident at Antioch (Gal. 2:11-18)
James D. G. Dunn
Whose Flesh? What temptation? (Galatians 4.13-14)
Troy W. Martin
The Politics of Identity in Ephesians
Margaret Y. MacDonald
The First Contribution to the pisti,j Cristou/ Debate: A study of ephesians 3.12
Paul Foster
"To Die Is Gain" (Philippians 1:19-26): Does Paul contemplate suicide?
N. Clayton Croy
Colossians and the Pauline School
Angela Standhartinger
Roman Crete and the Letter to Titus
George M. Wieland
VOLUME 4
The Genre of Acts: Moving toward a consensus?
Thomas E. Phillips
Madness in the Method? The acts of the apostles in current study
Todd Penner
The 'We'-Passages in Acts: On the horns of a dilemma
J. M. Wedderburn
Luke-Acts and the Imperial Cult: A way through the conundrum?
C. Kavin Rowe
The Imperial Authority and Benefaction of Centurions and Acts 10.34-43: A response to C. Kavin Rowe
Justin R. Howell
Exchanging Favour for Wrath: Apostasy in Hebrews and patron-client relationships
David deSilva
Anti-Judaism in Hebrews?
Clark M. Williamson
The Product of a Petrine Circle? A reassessment of the origin and character of 1 Peter
David G. Horrell
The Use of "Story" in the Letter of Jude: Rhetorical strategies of Jude's narrative episodes
Robert L. Webb
The Johannine Epistles and the Question of Early Catholicism
C. Clifton Black II
Honor Discourse and the Rhetorical Strategy of the Apocalypse of John
David A. deSilva
"Uncovering Her Wickedness": An inter(con)textual reading of revelation 17 from a postcolonial feminist perspective
Jean K. Kim
The Millennium (Rev 20.4-6) as Heaven
Charles Homer Giblin
Hindrance or Help: Does the modern category of 'Jewish-Christian Gospel' distort our understanding of the texts to which it refers?
Andrew Gregory
The Gospel of Thomas
April D. DeConick
The Gospel of Mary
Christopher Tuckett
The Gospel of Peter
Paul Foster

Chapter 1: The Multivalence of the Term "Original Text" in New Testament Textual

Sociology of the Sacred

The SAGE Handbook of the Sociology of Religion