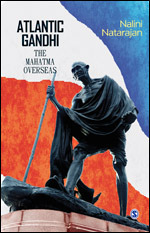 Share
Other Titles in:
History (General) | Social and Cultural History (General) | Sociology (General)
January 2013 | 264 pages | SAGE India
Download flyer
Using the frames of diaspora theory, post-colonial discourse theory and the recent Atlantic turn in studies of resistance, this book brings into relief Gandhi's experience as a traveler moving from a classic colony, India, to the plantation and mining society of South Africa.

The author forwards the argument that this move between different modes of production brought Gandhi into contact with indentured laborers, with whom he shared exilic and diasporic consciousness, and whose difficult yet resilient lives inspired his philosophy. It reads Gandhi's nationalistic (that is, anti-colonial) sentiments as born in diasporic exile, where he formed his perspective as a provincial subject in a multiracial plantation.

The author's viewpoint has been inspired by the new analytic that has emerged in the last few decades: the Atlantic as an ocean that not just transported the victims of a greedy plantation system, but also saw the ferment of revolutionary ideas.

Learned and insightful, Nalini Natarajan, has written an amazing study of Gandhi which shows how transnational, planetary forces from the Caribbean, South Africa, and India were brought to bear on his concept of Indianness. His reading of Thoreau, Ruskin, and Tolstoy helped him form his conception of India as frugal, vegetarian, spiritual, adhering to ahimsa and satyagraha, and a style of anti-modernism which would lead to a very modern struggle of independence on the one hand but separation from the struggles of Zulu in Africa and blacks in Guyana on the other hand. Call them coolie, subaltern, or proletarian, Gandhi's construction of the idea of "India" arose in relation to, but not identity with, the workers of the barracks, the cane field, and the gold mine who produce in war, drugs, and money the defining experiences of modernity. Few will be able to read this book without serious reconsideration of Gandhi's cultural politics and political philosophy. Here is an oceanic Gandhi.

Peter Linebaugh author of London Hanged Crime and Civil Society in the Eighteenth Century (1991) and co-author of The Many-Headed Hydra: Sailors, Slaves, Commoners and the Hidden History of the Revolutionary Atlantic (2001)

In Atlantic Gandhi: The Mahatma Overseas, Nalini Natarajan places the "coolie woman" in South Africa under the microscope of Gandhian lens against the parallel discourses on their questionable sexuality and value as a labour resource in other sites of Indian indentured labour, including the Caribbean. In doing so she moves us towards a current and more comparative rethinking of the historical clichés that have typified the study of diasporic Indian gender relations under the colonial enterprise.

[The book] opens a new window explaining the Gandhian construct of the “Indian nation” as being deeply rooted in the 19th century Atlantic revolutionary legacies...the book contends the popular belief that Gandhi’s South Africa experiments were novel yet merely a preparatory phase for his formidable contribution to Indian nationalism...[it is] a groundbreaking work revealing the Atlantic linkages of Gandhian thoughts and tactics.... A must read.

Nalini Natarajan makes a persuasive case for understanding Gandhi’s diasporic sojourns abroad as the transformative foundation for his mature sociopolitical position. Gandhi’s only time within the Atlantic region was his journeys to London. Thus the “Atlantic” in Natarajan’s title refers not primarily to a place, but to an analytic: the notion of the Atlantic region as ground zero for the development of the modern capitalist world-system…. this important and eminently readable book not only makes critical interventions into both Indian diaspora and Black Atlantic studies, but also the history and politics of the modern world.

[The book] throws open a rich corpus worth engaging with...it traces Gandhi’s life as a cosmopolitan diasporic subject whose life abroad connects provocatively with the ferment of ideas around the Atlantic rim...the author’s appreciable effort is visible from the corpus of reference used to etch the volume.