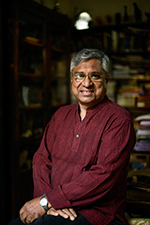 Aditya Mukherjee is Professor of Contemporary Indian History, Centre for Historical Studies and Dean, School of Social Sciences, Jawaharlal Nehru University (JNU), New Delhi. He was educated at St. Stephen’s College and JNU. He is the Editor of the ‘Sage Series in Modern Indian History’ published by SAGE publications, (fifteen monographs already published) and was editor of the Selected Works of Jawaharlal Nehru (2009-11).He is Member of the Council of The Indian Council for Historical Research (ICHR) since 2009.He specializes in Economic History, particularly business history and the political economy of post-colonial development. He was President of the Indian History Congress for Modern India, 2007-8. He has been Visiting Professor at Duke University, U.S.A., 1986;JSPS fellow and Japan Foundation Fellow at University of Tokyo, Japan,1996 and 1999-2000 respectively;Visiting fellow at the Institutes of Advanced Study at Lancaster, UK and at the University of Sao Paulo, Brazil; Fellow at the Institute of Advanced Study at Nantes, France, 2010 and Visiting professor at La Sapienza, University of Rome, Italy, 2013. His publications include the following books: India's Struggle for Independence, Viking, 1988, Penguin, 1989, 58th reprint in 2014, and India Since Independence, Penguin, 2008, both co-authored and translated into five languages;Imperialism, Nationalism and the Making of the Indian CapitalistClass 1927-1947, Sage, 2002;RSS, School Texts and The Murder of Mahatma Gandhi: The Hindu Communal Project, Sage, 2008, co-author; A Centenary History of the Indian National Congress, 1964-1984, Vol.V,(editor),Academic Publishers, New Delhi, 2011.

SAGE Series in Modern Indian History
RSS, School Texts and the Murder of Mahatma Gandhi
Imperialism, Nationalism and the Making of the Indian Capitalist Class, 1920-1947