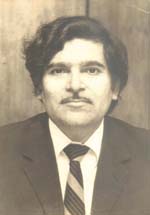 D. K. Rangnekar (1931–84), an economist, author and futurologist, was a student of the Bombay University later proceeding to Cambridge University for his Tripos and then the London School of Economics for his PhD in Economics as a Tata Fellow. Though trained as an economist, he soon moved into journalism with an initial stint at Ceylon Daily News in Colombo and later in 1963 as Resident Editor of The Economic Times. He swiftly took over as the Editor of the paper and steered it till January 1979. He then proceeded to be the Editor of Business Standard till his early demise in 1984. While most of his writings are in these two economic dailies, he did write widely. This includes magazines and journals like Seminar, Economic and Political Weekly, Mainstream and the Illustrated Weekly of India and international magazines, like Time. Separately he also authored a couple of books, such as Poverty and Capital Development in India (Royal Institute of International Affairs), India Britain and ECM and pamphlets, such as Bokaro: A Story of Bungling (self-published, 1963).

In his time he served on a number of government-appointed committees like the National Council for Science and Technology’s Futurology Panel and the Export Strategy Committee (the Tandon Committee), among others. Not bound by doctrinaire ideology or party-politics, his contributions to these committees were known for their critical independence, which in some instances took the form of a ‘Note of Dissent’. His prescient observations can be gauged by the fact that it was in the 1970s and early 1980s that he wrote about India’s need to de-license to create competitiveness and to exploit the opportunities of a knowledge economy hub, in addition to a number of other relevant observations.

His scholarship and leadership on such issues led to wider recognition, including a nomination amongst Time magazines’ 500 global leaders in the late 1970s. His broad spectrum of interests and activities also included films (he actively participated in the National Film Development Corporation) and music (he was an early member of the first Jazz Yatra). Preoccupation and interests like these, among others, led to his unique stamp on the shape and coverage of the two economic dailies he edited where cultural and political issues got adequate space.

The Politics of Poverty