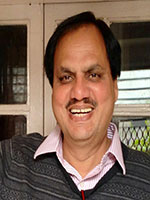 Dr Dalip Singh is a senior bureaucrat who joined the Indian Administrative Service (IAS) in 1982. He belongs to the Haryana Cadre and has held many important positions in the state and Central Governments.

He obtained his post-graduation in psychology from the University of Delhi in 1978 after which he completed his M.Phil and Ph.D. in psychology with research work in areas such as managerial effectiveness, transactional analysis, leadership and personality. Dr Singh taught at the Faculty of Management Studies, University of Delhi (1980–82) before joining the IAS. He has the rare distinction of being awarded D. Litt. in psychology for his work on EQ, by Bundelkhand University, Jhansi, India, in 2005.

He is a trained psychologist and an expert on emotional intelligence. He lives in Chandigarh, India, and may be contacted at www.eqindia.com