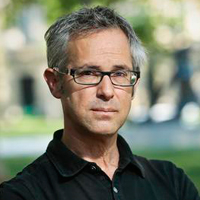 Des Freedman is Professor of Media and Communications in the Department of Media, Communications and Cultural Studies at Goldsmiths, University of London. He is co-director of the Goldsmiths Leverhulme Media Research Centre and a founding member of the Media Reform Coalition.

His publications include, as editor, Capitalism’s Conscience: 200 Years of the Guardian (Pluto, 2021) and, as author, The Contradictions of Media Power (Bloomsbury, 2014), The Politics of Media Policy (Polity 2008), Misunderstanding the Internet (Routledge, 2016, co-authored with James Curran and Natalie Fenton) and The Media Manifesto (Polity, 2020, co-authored with Natalie Fenton, Justin Schlosberg and Lina Dencik). He has co-edited books on a wide range of themes including media, racism and terrorism, the politics of higher education, media reform and the future of television.

Media, Democracy and Social Change
Media and Terrorism
War and the Media