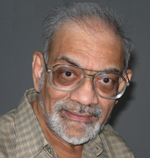 Hedwig Lewis is an educationist and writer and has served as a lecturer and principal. He received the Rev T. A. Mathias Award for Innovative College Teachers from All India Association for Christian Higher Education (AIACHE), New Delhi, in 1993. He has authored 30 books and his publications are on wide-ranging subjects that fall under several categories: spirituality, prayer, skill-building, biographies, inspirational, history, festive, and e-book. Some of his most noticeable works are At Home With God (1991), Happiness Manufacturers (2001), Mirrors of Life (1998), Once Upon A Time (2010), Fun With Words (1983), and Gujarat Jesuits Remembered (2002). Several of his books have been translated into Spanish and Lithuanian; some have been translated into different regional languages, including the previous edition of Body Language, which was translated into Malayalam. Father Lewis is a Jesuit priest and can be reached at St Xavier’s College, Ahmedabad (Gujarat, India).