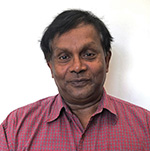 Kalinga Seneviratne is a journalist, professor, radio broadcaster, television documentary-maker, media analyst and international communications specialist. He is former Head of Research, Asian Media Information and Communication Centre (AMIC), Singapore. Dr Seneviratne is a former Lecturer in the Faculty of Communication Arts, Chulalongkorn University, Bangkok, and Wee Kim Wee School of Communication and Information at the Nanyang Technological University, Singapore. He is a media analyst with many years of experience in journalism. He was the Australia and South Pacific correspondent for the Inter Press Service (IPS) news agency from 1991 to 1997 and continued to write for it for many years after that from countries in Asia, Middle East, Africa and Latin America. He has been a member of IPS’ ‘TerraViva’ reporting team at a number of major UN conferences in the 1990s. He is currently the Southeast Asian Director for Berlin-based IDN (In-Depth News) and also writes for the South China Morning Post in Hong Kong and Straits Times in Singapore. Dr Seneviratne holds a PhD in international communications from Macquarie University, Australia, and MA in sociology from the University of Technology Sydney. He has been an award-winning radio broadcaster in Sydney. He received the Media Peace Award (1987) from the UN Association of Australia for a series on the relationship between rich and poor countries and the Educational Award (1992) from the Community Broadcasting Association of Australia for his services to the Australian community radio sector. He has several published works to his credit. Dr Seneviratne has also taught development journalism and international communications at the Macquarie University, Sydney; University of Technology Sydney; Bangkok University, University of Central Asia, Kyrgyzstan, and Ngee Ann Polytechnic, Singapore. He is currently working in collaboration with a number of Asian communication scholars to reform journalism education in Asia by introducing mindful communication strategies drawn from Asian philosophical roots.