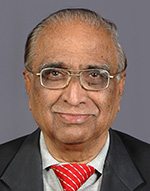 Krishnamurthy Srinivasan has been making valuable contributions in the field of research in Population Studies for over four decades. He is an internationally acclaimed demographer who has served the country through various national and international committees and associations. He was a member of the National Commission on Population and of the National Statistics Commission. He was Senior Professor and Director of the International Institute for Population Sciences, Mumbai, from 1978 to 1992. As Executive Director of the Population Foundation of India during 1995 to 2002, he promoted and enhanced the role of nongovernmental organizations in family planning, reproductive and child health programs. He was employed with the Population Division of the United Nations and his work was appreciated in other countries. As the chairman of a group set up by the WHO and the United Nations Populations Fund, he recommended policies for Population Research Centers in China.

Professor Srinivasan has authored or contributed to more than 15 books and has more than a hundred national and international peer reviewed academic publications to his credit. He obtained his MA in Mathematics from Madras University and subsequently graduated from the Indian Statistical Institute, Kolkata, with a Master’s in Statistics. He went on to obtain a Master’s degree in Public Health from Harvard University and PhD in Demography from Kerala University. He was a National Fellow on population at the Indian Council for Social Science Research (ICSSR) during 2013–15 and affiliated to MIDS, Chennai. At present, he is an Honorary Professor in the Institute for Social and Economic Change, Bengaluru.