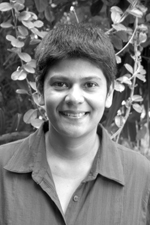 Neloufer de Mel is Professor of English at the Department of English, University of Colombo, Sri Lanka. She is the author of Women and the Nation’s Narrative: Gender and Nationalism in 20th Century Sri Lanka (Kali for Women, 2001) and co-editor of At the Cutting Edge: Essays in Honour of Kumari Jayawardena (Women Unlimited 2007) and Writing an Inheritance: Women’s Writing in Sri Lanka 1860–1948 (WERC, 2002). She is the recipient of many distinguished research awards, including the John D. and Catherine T. MacArthur Research and Writing Grant, a Fulbright Senior Research Fellowship at Yale University, and a Ford Associate in Global Women’s Studies Fellowship at the Five College Women’s Studies Research Center, USA. She has also been a visiting scholar at the Center for the Study of Gender and Sexuality at New York University, and the Women’s Research Center at the University of Rutgers.

Neloufer de Mel has served on the Regional Advisory Panel of the Social Science Research Council, and serves on the management board of Women and Media Collective, Colombo. She was the founder editor of Options, a journal on Sri Lankan women’s issues, and has published several essays on postcolonial theatre, literature and film.