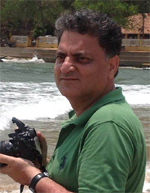 Nirmal Kumar is Associate Professor of History at Sri Venkateswara College, University of Delhi. He has been working on 18th-century Rajasthan and also on Hindi films. He has co-edited a book Filming the Line of Control for Routledge in 2008. Two of his books are under publication: Essays in History of Early Modern India and Medieval Delhi: A Reader. He is also the General Editor of a series on Historians of Medieval India.

Dr Kumar is widely travelled and well networked with renowned institutions worldwide. He is fellow of the Royal Asiatic Society of Great Britain and Ireland and Member of the Women’s History Network, UK. He is also associated with the Society for South Asian Studies, London, and British Association of South Asian Studies, UK. He is on the Board of Contemporary India Study Center Aarhus, Aarhus University, Denmark, and a guest fellow at the Indian Institute of Advanced Study, Shimla (2012). Besides, he takes keen interest in Bihar, his home state in India, and is an ace photographer.