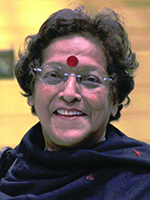 Dr Shoma A. Chatterji is a freelance journalist, film scholar and author based in Kolkata. She has won two National Awards for Best Writing on Cinema—Best Film Critic in 1991 and Best Book on cinema in 2002. She won the Bengal Film Journalists Association’s Best Critic Award in 1998, the Bharat Nirman Award for excellence in journalism in 2004, a research fellowship from the National Film Archive of India in 2005–2006 and a Senior Research Fellowship from the PSBT Delhi in 2006–2007. She has authored 22 books on cinema and gender and has been a member of jury at several film festivals in India and abroad.

She holds a master’s degree in Economics and in Education; PhD in History (Indian Cinema) and a Senior Research Post-doctoral Fellowship from the ICSSR. In 2009–2010, she won a Special Award for ‘consistent writing on women’s issues’ at the UNFPA–Laadli Media Awards (Eastern region), was bestowed with the Kalyan Kumar Mitra Award for ‘excellence in film scholarship and contribution as a film critic’ in 2010 and the Lifetime Achievement SAMMAN by the Rotary Club of Calcutta-Metro City in July 2012.