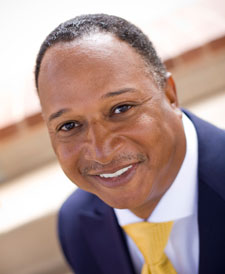 Over his 31 years in education, Stephen has been a classroom teacher, assistant principal, principal and director of secondary education. Most of his experiences have been in schools that made significant growth in short periods of time thus, resulting in both National and State Blue-Ribbon distinction.

Stephen is founder of the nationally recognized Ladies Club programs which provide options for thousands of at-risk and honor students throughout the United States. He is currently CEO & President of The Peters Group, a national education consulting company. The Peters Group has a track record of creating and sustaining success in schools, and districts, by supporting educators through a 3-step process of teaching and learning.

He has served on panels as an education expert with former U.S. Secretary of Education, Dr. Rod Paige in Washington, D.C. He also serves on university business advisory boards and Investment Group advisory boards where he is president.

His mentoring and self-empowering program, Gentleman's Club, has been featured on the Oprah Winfrey Show as well as "America, America", which broadcasts to two million viewers in Portugal and Brazil.

Stephen is one of the most sought after speakers in the United States.

Teaching to Capture and Inspire All Learners