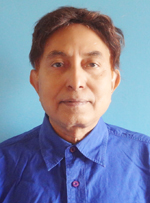 Tapan K Ghosh was a professor in Department of English, Rabindra Bharati University, Kolkata. After completing his term as Head of the Department, he took voluntary retirement and turned to creative writing. His stories have since then been published in the US and UK journals, one of them earning a place among the top-10 stories in a competitive event held in England, and later published in the anthology The Bus Stop Scheherazade and Other Stories.

Dr Ghosh’s story “Border” also found a place among the top-12 stories in Labyrinth Competition of London in February 2005, impressing the judges for its “confident storytelling and well-measured prose.”

Dr Ghosh has been a jury member for the Central Board of Film Certfication (CBFC) and has directed the documentary, Under the Sky.