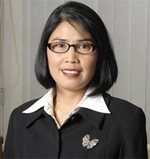 Tian Belawati is Professor and currently Rector of Universitas Terbuka (Indonesia Open University). She has been working in the field of distance education since 1985 and has presented many papers at national and international conferences, and has published numerous books and academic journals. She has served as Secretary General (2008–2009) and President (2009–2010) of the Asian Association of Open Universities (AAOU) and is President of the International Council for Open and Distance Education (ICDE). She has also been actively involved in research on the use of ICT for education in Asia with the PANdora Network, on which she now serves as a Board Member.