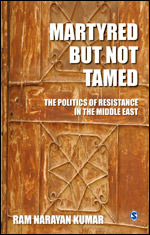 Share
Other Titles in:
Middle East Politics | Peace Studies/Conflict Resolution | Politics (General)
December 2012 | 356 pages | SAGE Publications Pvt. Ltd
Download flyer
Part historical chronicle, part socio-political treatise, Martyred but Not Tamed is devoted to the Middle East and focuses on the four most combustible countries at the heart of this supremely volatile area-Palestine, Lebanon, Syria and Iraq. Based on a series of extensive interviews with local actors, it also draws on the author's extensive scholarship. Attentive throughout to the viewpoints of the victims, it stands as a refreshing corrective to the distortions or downright lies which all too often inform the 'authoritative' discourse on the modern Middle East.

Along the way, in a systematic, thorough, yet vivid and highly readable manner, the book revisits several 'well-known' episodes of recent history, but with an unsparing gaze, untainted by the softening lenses which tend to distort the self-serving Western narrative. It highlights the role played by Britain and the other colonial powers, which for pure expediency did not hesitate to carve up the body politic of the region; to exacerbate and exploit existing divides; to create new divisions where none existed; and to draw borders that defied all ethnic and historical logic, thereby sowing the seed of intractable conflicts such as the one between Israel and the Palestinians.

Lastly, in a long, densely informative chapter on "oil politics", the book lays bare the naked economic and strategic interests which prompted nearly all the moves of the imperial powers in the region, from the days of overt colonial occupation down to the present age of indirect control and disguised hegemony.

Foreword
Jean Ecalle
Imagining War: Anticipations and Outcomes
The Discovery of Oil and the Geography of Imperial Conquest
The Ordeals of Arab Nationalism: A Discussion in Damascus
Refugees in Resistance: Memories and Dreams from Exile
The Hizbullah Model: Militant Tactics and Political Savvy
Afterword
Jean Ecalle
Name Index
Subject Index
The book is a useful addition to an already large volume of existing literature on west Asia and lucidly explains the nature of conflict in the region detached from western propaganda.
U.S.I Journal, Vol 143, July-September 2013