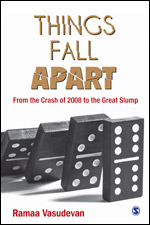 Share
Other Titles in:
Economics (General) | Financial Economics
July 2013 | 244 pages | SAGE India
Download flyer
The crash of 2008, when financial markets came to a standstill, has had profound effects that are still being felt globally. Five years after those dramatic events, countries such as Greece, Spain, Italy, Portugal, and Cyprus are still reeling from the aftereffects of the financial crash, while the USA and the UK continue to be in the grip of a long slump.

The crash exposed criminal swindles and the more rampant risky practices that have become the norm with the major banks. It has also revealed the failure of policy to curb unbridled risk taking with other people’s money and the failure of policy-makers and economists to see the signs of the inevitable collapse.

This book goes further to penetrate the fog of finance and explore the structure and balance of class forces that led to the crisis and its unfolding consequences. The author places the crisis in both historical and global perspectives through comparisons with the Great Depression and the focus on elaborating the role of the hegemony of the dollar over the international financial system. She argues that the crisis is as much a crisis of the neoliberal model of accumulation that finance launched as it is of the mechanisms by which dollar hegemony was preserved.

This book provides an accessible point of entry to the literature on the crisis and its aftermath. It lays out a rich empirically grounded analysis of both the structural causes and the continuing repercussions of the crash of financial markets in 2008.
Preface
All That Is Solid Melts into Air
The Tip of the Iceberg
The House of Cards
When Wall Street Rules Main Street
Another Gilded Age
Dollar Rules
Aftershocks: The Crisis Goes Global
Beyond the Crisis
Notes and References
Some Suggestions for Further Reading
Index
[The book] captures the financial crash of 2008 and its aftermath even while holding reader’s attention and not compromising on academic rigour...the accompanying graphs and figures are clearly presented lending more punch to the text. The publisher has thoughtfully placed the text and related graphs on the same page to provide a smooth reading experience. The block diagram describing the structure of complex financial instruments will appeal to a wider audience...the prose is easy and book moves at a racy pace.
Business Line

An accessible, engaging and comprehensive discussion of the structural roots of crash of 2008 and its aftermath...historical and political perspective, rich economic analysis and empirical grounding are the strengths of this book, lively and literary style stays throughout the book.... A very welcome effort in more ways than one.

A very welcome effort...it is a book that needs to be read not just by our S&T policy developers and administrators, but also civilian industry leaders and government policy makers as also their defence counterparts.