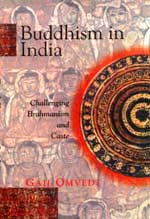 Share
Other Titles in:
Culture and Religion | Sociology of Religion
April 2009 | 316 pages | SAGE India
Download flyer
This book is an historical survey of Buddhism in India and shows how over a period of 2500 years, Buddhism has been engaged in a struggle against caste-hierarchy. It has challenged Brahmanism, the main exploitative system of traditional Indian society, and instead endeavoured to build religious egalitarianism.

The book focuses on the question of what is the 'core' element in Buddhist Dhamma, on what role it has played in the development of Indian civilization, and the changed perspective of Buddhism in a modern industrial age.

The author starts with the rise of Buddhism in the middle of the second millenium BC amidst crucial cultural and social developments. The teachings of Buddha and the different forms of Buddhism have been discussed. Here the contrast between Buddhism and Brahmanism with regard to the caste system, the origin and role of state, the approach to various social groups and the position of women is well defined.

The author examines the civilizational impact of Buddhism, its connections with ancient India's leading role in trade, its spread and popularity in South and Southeast Asia, its role in fostering a dynamic and open society as against the hierarchical, village-bound, caste-defined Brahmanical social system.

Then came the defeat of Buddhism in India and the reassertion of Brahmanism. For centuries Buddhism retreated to what some term as its 'underground survival'. Its relationship with the syncretist Bhakti movement has been another important aspect of the book.

Finally the revival of Buddhism in the nineteenth century, the dalit-based success of the religion under Ambedkar and its future in India have been studied. The author argues that Ambedkarian Buddhism can serve as a powerful force for reconstructing society in a new and challenging millenium.

Introduction
Reconstructing the World
The Background to Buddhism
The Dhamma
The Basic Teachings of Buddhism
Transitoriness and Transformations
Buddhist Civilisation
The Defeat of Buddhism in India
After Buddhism
The Bhakti Movements
Colonial Challenges, Indian Responses and Buddhist Revival
Navayana Buddhism and the Modern Age
Conclusion