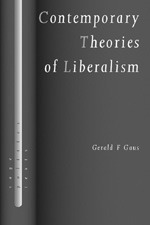 Share
Other Titles in:
Politics (General)
April 2003 | 240 pages | SAGE Publications Ltd
Download flyer
`The author has provided us with a masterful overview and critique of liberal theorizing of the past quarter-century. While dealing exhaustively and fairly with each of a variety of broadly liberal approaches, Gaus also presents a compelling argument for his own preferred "justificatory" approach. His analyses range across familiar territory - Berlin, Gauthier,

Baier, Habermas, social choice theory, Rawls, and so on - and are always

illuminating and, taken together, provide both the newcomer and the old-hand much to ponder' - Fred D'Agostino, University of New England, Armidale

Contemporary Theories of Liberalism provides students with a comprehensive overview of the key tenets of liberalism developed through Hobbes, Locke, Kant and Rawls to present day theories and debates.

Contemporary Theories of Liberalism is essential reading for students and academics seeking a deeper understanding of liberal political theory today.