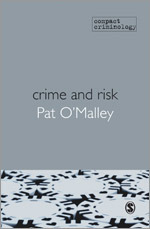 Over recent years, the governance of crime - from policing and crime prevention to sentencing and prison organization - has moved away from a focus on reforming offenders toward preventing crime and managing behaviour using predictive and distributional (such as risk) techniques.

Crime and Risk presents an engaging discussion of risk strategies and risk-taking in the domain of crime and criminal justice. It outlines the broad theoretical issues and political approaches involved, relating risk in contemporary crime governance to risk in criminal activity. Taking a broad and discursive approach, it covers:

Compact Criminology is an exciting series that invigorates and challenges the international field of criminology.

Books in the series are short, authoritative, innovative assessments of emerging issues in criminology and criminal justice – offering critical, accessible introductions to important topics.  They take a global rather than a narrowly national approach.  Eminently readable and first-rate in quality, each book is written by a leading specialist.

Compact Criminology provides a new type of tool for teaching, learning and research, one that is flexible and light on its feet. The series addresses fundamental needs in the growing and increasingly differentiated field of criminology.

It is into this muddy conceptual terrain that Pat O'Malley treks, unabashedly pairing 'crime' and 'risk' in the title of his book, and undertaking to untangle their ambiguous meanings and contradictory connections... O'Malley carefully demonstrates, risk and its relation to crime are not self-evident at all; they are defined differently by neo-conservatives and neo-liberals, by risk-takers and those who would govern them, and in turn attributed variously to individual decision making, social dysfunction, or the logic of the market. Once defined in a particular way, risky situations are then policed through particular forms of measurment that produce data sets and statistical predictions, all seeming to confirm that such risk is indeed a real and measurable phenomenon.

Pat O'Malley has produced an important book... In just four chapters, he offers a critically informed 'tour de force' of the criminological embrace of risk... O'Malley's book has provided a fertile breeding ground for pursuing questions such as these and challenging the powerful presence of the concept of risk within criminology.

In this remarkably short and readable volume, O'Malley delineates with precision what has been so productive about the largely dystopian pictures of risk-based crime governance, while identifying the complex shades of gray so often overlooked by others, and ultimately points to 'lines of flight'.

In his well-researched, balanced, and thoroughly engaging book, Crime and Risk, Pat O'Malley takes on some of these big-picture questions about risk as they apply to the nature of modern day (personal and property) crime and crime policy. The starting point for this analysis is the idea that risk is a dynamic, fluid concept, not something that should be simply cast as perpetuating a 'culture of control'.

"O’Malley, in this beautifully simple, insightful and erudite book, locates risk within a variety of mentalities that have been, and are being, deployed to “govern crime” -- in doing so he places risk, where it should be, at the very centre of criminological thought and practice. This is an important book."

Pat O'Malley's approach to risk, crime and criminal justice is stimulating and provocative. He points out that in criminology risk is seen almost entirely in negative terms, in marked contrast to other social spheres, where risk is regarded much more positively, as for example in business innovation and entrepreneurship. O'Malley says that risk-taking is an aspect of criminal behaviour that is generally overlooked by criminology, and directs his readers' attention to Katz and to the cultural criminologists who look at risk-taking as a source of excitement for offenders. O'Malley's highly original 'risky criminology' reconnects risk with criminological theory, and challenges those concerned with punishment and crime prevention to develop constructive, imaginative measures and strategies concerned with the reducing harm caused by criminal and anti-social risk-taking behaviour rather than trying to control risk through repression and exclusion.

An exceptional resource on risk for students in criminology, sociology and social policy. This book serves as an excellent critical introduction to the relationship between crime and risk.

This is a very good summary text that outlines many of the key themes currently debated in the area of crime and risk.

Excellent text. Concise coverage of all essential aspects of the topic.

Thank You. This book will be recommended to the Policing and Police Module at Durham. It is very relevant to their study of policing and will assist in understanding the nature and characteristics of contemporary policing.