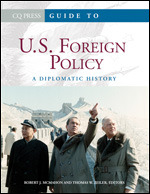 Share
Other Titles in:
Politics & International Relations
April 2013 | 800 pages | CQ Press
Download flyer
At no time in American history has an understanding of the role and the art of diplomacy in international relations been more essential than it is today. Both the history of United States diplomatic relations and the current United States foreign policy in the 21st century are major topics of study and interest in America and around the world.

Spanning the entire history of American diplomacy - from the first Continental Congress, to the war on terrorism, to the foreign policy goals of the 21st century - Guide to U.S. Foreign Policy traces not only the growth and development of diplomatic policies and traditions, but also the shifts in public opinion that shape diplomatic trends. This comprehensive, two-volume reference shows how the United States gained 'the strength of a giant' and also analyzes key world events that have determined the United States' changing relations with other nations.

A three-part structure makes the key concepts and issues accessible to researchers:

Part One features 40 topical and historical chapters, in which expert writers cover the diplomatic initiatives of the United States from colonial times through the present day.

Part Two is an A to Z handbook of diplomatic terms and concepts, people, events, and issues in American foreign policy.

This unique reference highlights the changes in U.S. diplomatic policy as government administrations and world events influenced national decisions. Topics include imperialism, economic diplomacy, environmental diplomacy, foreign aid, wartime negotiations, presidential influence, NATO and its role in the twenty-first century, and the response to terrorism. Additional featured topics include the influence of the American two-party system, the impact of U.S. elections, and the role of the United States in international organizations.

Guide to U.S. Foreign Policy is the first comprehensive reference work in this field that is both historical and thematic. This work will be of immense value for researchers, students, and others studying foreign policy, international relations, and U.S history.

"An unbiased, factual review of historical periods and subjects that is suitable for college and adult researchers."