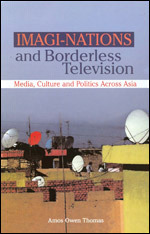 `Imagi-Nations and Borderless Television neatly captures the revolution that television in Asia has gone through over the last 15 years…. Important for anyone wishing to understand the future of Asian television' -

`Amos Owen Thomas takes us through this momentous change, with an extensively researched and cogently argued book. A must-read volume for scholars interested in television in Asia and around the world' -

Surveying developments over the decade 1992–2001, this book chronicles and analyses the salient aspects of the impact of transnational television on the television and advertising industries in three regions—South Asia, Southeast Asia, and Northeast Asia. Through lively case studies from the Indian subcontinent, Greater China and the Malay Archipelago, the author examines developments with particular reference to their history, geography, cultural policies and broadcasting history, as also the concurrent evolution of domestic commercial television in each country.

"First-time researchers in this area will particularly appreicate the extensive appendices and bibliography (fully 20 percent of the book)."

The book is well written and deals with a topic of great current concern-the role the electronic media plays at the international level in affecting the cultural, social and political lives of indigenous populations, particularly in the developing countries.