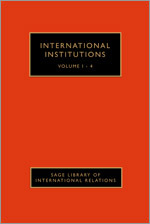 transnational actors. Some of these entities have been created by states

themselves, often as a result of the need to jointly solve a common

problem, such as the United Nations. Other international entities

are created when members of a society organize across traditional

national boundaries to deal with a collective concern, such as Amnesty

International or Oxfam. To understand and explain contemporary world

politics we need to consider these institutions, as key actors influencing

issues of war and peace.

Although transnational actors are not new on the world stage, the number

and type of these international entities expanded dramatically after

World War II. This set examines both the rise of these new transnational

actors and their effect on international politics and policies.

Volume One: Causes – Why Do International Institutions Exist?

Volume Two: Consequences – When, Where and Why International