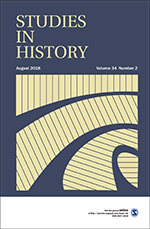 Studies in History reflects the considerable expansion and diversification that has occurred in historical research in India in recent years. The old preoccupation with political history has been integrated into a broader framework which places equal emphasis on social, economic and cultural history.

The Journal examines regional problems and pays attention to some of the neglected periods of India's past. The journal also publishes articles concerning countries other than India. It provides a forum for articles on the writing of different varieties of history, and contributions challenging received wisdom on long standing issues.

This journal is a member of the Committee on Publication Ethics (COPE).

Studies in History, a peer-reviewed journal, aims to publish original works with information, arguments and insights that contribute significantly to the field of historical research. The journal reflects the considerable expansion and diversification that has occurred in historical research in India in recent years. The preoccupation with political history has been integrated into a broader framework which places equal emphasis on social, economic and cultural history. Newer approaches and themes that seek to advance the scope and significance of the discipline are promoted.

Guidelines for Contributors to Studies in History

MANUSCRIPTS: Manuscripts of articles should be submitted in MS-word in double-space with figures and tables attached in separate files. The cover page should carry only the title of the article and the author’s name, address (both postal and e-mail addresses), and phone and fax numbers. All articles must include an abstract of approximately 200 words and 4–7 keywords that reflect the theme of the article (for example: Dalit, autobiography, manual labour, tradition). Manuscripts should be sent to studiesinhistory@gmail.com or The Editors, Studies in History, Centre for Historical Studies, Jawaharlal Nehru University, New Mehrauli Road, New Delhi 110067.

Articles submitted to Studies in History should ideally be between 9,000-12,000 words in length, including footnotes and references.

Authors will be provided with a copyright form once the contribution is accepted for publication. The submission will be considered as final only after the filled-in and signed copyright form is received. In case there are two or more authors, the corresponding author needs to sign the copyright form.

PEER REVIEW POLICY: All manuscripts are reviewed initially by the Editors and only those papers that meet the editorial standards of the journal, and fit within the aims and scope of the journal, will be sent for outside review. Studies in History adheres to a rigorous double-blind reviewing policy in which the identity of both the reviewer and author are always concealed from both parties.

HEADINGS: Limit the levels of heading within an article to three or four (maximum). Avoid lengthy headings and do not number them. The printed style will demonstrate their order clearly without recourse to an explicit numbering, such as 1.1.

FOOTNOTES: Should be consecutively numbered and presented at the foot of each page. In one sentence of the text only one note is preferred. The complete source references for tables, figures and maps should be cited below each respective table, figure or map, under the section ‘source’.

SPELLINGS: Use British spellings rather than American (hence, ‘programme’ not ‘program’, ‘labour’ not ‘labor’, and ‘centre’ not ‘center’). Where alternative forms exist, choose ‘ize’ spellings instead of ‘ise’ (for example, civilize, commercialize, organization). However, please look out for exceptions such as comprise, supervise and incise, where the ‘s’ is not an ending but part of the root.

ITALICS: Avoid excessive italicization for emphasis but use them for book titles and foreign words, unless particular terms occur so frequently that they are better in upright (roman) type. Proper nouns in a foreign language should always be in roman. We also prefer to set common terms such as ‘status quo’, ‘a priori’ and ‘et al.’ in roman; Ibid., however, will be in italics.

HYPHENATION: Please pay attention to consistency in the hyphenation of words. Do not alternate, for example, between ‘macro-economic’ and ‘macroeconomic’, ‘decision making’ and ‘decision-making’.

ABBREVIATIONS: Include a final stop in abbreviations (words shortened by omitting the end), such as p., vol. and ed., but not in contractions (words shortened by omitting the middle), such as Mr, Dr, edn, eds and Rs. No stops are needed between capitals: e.g., CPI, INTUC, MLA. Short forms likely to be unfamiliar to some readers should be spelt out in full the first time they occur. Please avoid ‘i.e.’ and ‘e.g.’ in the text but use them in notes if you wish. If few in number, list abbreviations early in the notes. Alternatively, they can be introduced at first use—e.g., Oriental and Indian Office Collections (hereafter OIOC) or Board of Revenue Proceedings (hereafter BRP).

NUMBERS: Write numbers in figures (rather than words) for exact measurements and series of quantities, including percentages. In more general description, numbers below 100 should be spelt out in words. In text use ‘per cent’; in tables the symbol ‘%’. Write ‘0.8’ rather than ‘.8’, except for levels of probability. Use lower-case italics for p (probability) and n (number). Use fuller forms for numbers and dates—e.g., 1780–88, pp. 178–84, and pp. 200–2.

DATES: Give specific dates in the form 10 September 1760. Decades may be referred to as either ‘the eighties’ or ‘the 1880s’. Spell out the ‘nineteenth century’, etc.

REFERENCES: We follow the Chicago Manual of Style in the formatting of the reference details for articles, books, essays, theses and other publications in the footnotes and the source citations for tables, figures and maps. Following is an encapsulated list of the formatting styles for some of the frequently used types of references.

FIGURES AND TABLES: Please use short and crisp titles and headings in tables and figures. No vertical lines should be used in tables. Lay out parallel tables in similar ways using similar wording. Ensure that the units of measurement are stated and check any totals or averages. Artworks given to the journal should be of good quality to be reproduced in the journal. Images should be provided in TIFF/JPEG format with minimum 300 dpi and 1,500 pixels. Further, it is crucial that all text in the artworks corresponds to the text of the article in spelling and style.

Tables and figures to be indicated by numbers separately (see Table 1), not by placement (see Table below). All Figures and Tables should be cited in the text. Sources for figures and tables should be mentioned irrespective of whether or not they require permissions.

DIACRITICAL MARKS AND ACCENTS: Diacritical marks should be used in writing on pre-modern history. However, be very careful about the consistency. Italicized words can have diacritics as required. References in European languages other than English should be checked carefully for accents. In articles on the modern period diacritical marks should be used sparingly. In transliterating Persian terms, use F. Steingass, ? Comprehensive Persian–English Dictionary.

SAGE is committed to upholding the integrity of the academic record. We encourage authors to refer to the Committee on Publication Ethics’ International Standards for Authors and view the Publication Ethics page on the SAGE Author Gateway

To purchase a non-standard subscription or a back issue, please contact SAGE Customer Services for availability.