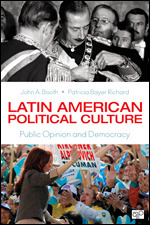 Insightful book, great for wider reading on Latin America. Easy to adopt, not a dense a book. I would recommend.