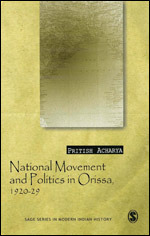 Share
Volume: 11
Other Titles in:
Asian History
March 2008 | 328 pages | SAGE Publications Pvt. Ltd
Download flyer
This book is a comprehensive study of the nationalist movement and politics in Orissa during the 1920s. It examines the national movement in the late nineteenth century and the first two decades of the twentieth century prior to the launch of the Civil Disobedience Movement by focusing on the regional peculiarities, especially the Oriya linguistic and cultural identity movement.

Based on extensive research, it reflects upon the emergence of a class of new intelligentsia as an opinion maker of the society, its concern for societal needs, the divergent trends within it, the commonalities and differences among them and the organizational linkages between the local intelligentsia and the nationalists. Despite the contradictions, the author argues that the local and national aspirations were not antagonistic but complemented each other, as witnessed during the Calcutta Congress of 1928, establishing the Indian National Congress' twin commitments on the question of regional identity and national liberation.

National Movement and Politics in Orissa: 1920-29 is a valuable contribution to the discourse on the nationalist movement and will be of great interest to students and scholars of modern Indian history as well as to the social science academia.

It is a well-researched volume with a sound empirical base which has the potential to illuminate the nature and scope of anti-colonial nationhood in the context of Orissa.

A major aspect of this book is that it assembles a host of language sources that include Oriya newspapers and some literary tracts… The value of this work is based on its explorations related to the interactions between the world of newspapers, literature, elite politics and the development

of nationalism in Orissa.