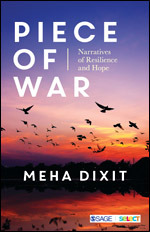 Share
Other Titles in:
Peace Studies/Conflict Resolution | Race, Ethnicity and Crime | Terrorism
October 2020 | 284 pages | SAGE Publications Pvt. Ltd
Download flyer
Throughout history war has affected civilizations in many ways. In contemporary times, Afghanistan, the Kashmir Valley, parts of Middle East and Africa continue to be embroiled in conflict. It makes you ask the question: Is there an ‘ordinary’ life beyond violence in these conflict zones? Through the real-life stories of people, the book attempts to uncover the human aspect of war, and how individuals and communities make sense of and cope with the pain and uncertainty. In this book, narratives of people who have either lived or are living in conflict zones are presented in an anecdotal manner, highlighting the extraordinary resilience humankind possesses and its ability to survive amidst despair and destruction. Documenting the author’s first-hand experience of confronting the realities of conflict-affected and ‘post-conflict’ regions of the Middle East, South Asia and West Africa (Afghanistan, Afghanistan–Pakistan border, Lebanon, Lebanon–Syria border, Sierra Leone, Indo-Pakistan border, Kashmir, Chhattisgarh, Jharkhand, Odisha and Rohingya refugees along Bangladesh–Myanmar border), the book is a raw and bleeding portrayal of hope and strength.

Piece of War will be a heartfelt and introspective read for all readers, and an analytical read especially for psychologists, anthropologists and journalists.
Foreword by Savita Hande
Preface
Acknowledgements
Introduction
Interpreting War
Normalizing Militarized Violence
Footprints and Aftermath throughout Generations
Children of War
Gendered Violence
Resilience, Coping and Hope

Piece of War: Narratives of Resilience and Hope by Meha Dixit (PhD) is a masterpiece of real-life experiences of ordinary people living (and who have lived) in some of the world’s most vile conflict zones in the world such as in Afghanistan, Indo-Pakistan border, Kashmir Valley, Lebanon and Sierra Leone. It is an extraordinary piece of poignant writing, weaving together the real-life experiences of ordinary people in three different regions of high-intensity armed conflict in South Asia, West Africa and West Asia. This book not only weaves together the narratives of horror and trauma of the selected civil wars, but more importantly, it weaves together the narratives of resilience, coping, and hope of the very same people. It is the latter that is the distinctive feature of this masterpiece. The breadth of coverage and the depth of personal feelings of the extraordinary people living in varied and various war zones woven in simple language make it an essential and exceptional reading for ordinary living minds in addition to academics and researchers.

Piece of War is a powerful account of the lives of people across conflict zones weaved together by the author Meha Dixit. The author superbly captures a range of emotions while seeing the world through the eyes of those caught up amidst war and conflict. Meha Dixit has gone where few dare to tread and brought out stories of war and conflict, of hope, of resilience, and the yearning of the human spirit. A must read for anyone who wants to understand conflict, its impact on people and finding the pieces which can build peace.

Dr Meha Dixit’s Piece of War: Narratives of Resilience and Hope is a seminal contribution to conflict zone literature, leveraging her first-hand experience of the lives and longings of violence-ravaged populations across continents to unearth the indefatigable nature of the human spirit. It is a silver linings playbook distilled from the fog of war.

This important book advances our understanding of war in four significant ways. First, the research concern here is firmly upon the consequences of war rather than the causes and conduct of war. Second, the focus is upon how war affects individuals and communities rather than interstate relations, geopolitics or regional power dynamics. Third, the author explicitly privileges narrative over theory and fieldwork over conceptualization, which distinguishes this book from earlier studies of war in International Relations. Fourth, the book is driven by an understated yet persistent normative concern for the predicament of the weak in awful conflict situations. Meha Dixit’s war stories, emerging as they do from a decade of fieldwork in a wide range of conflict and ‘post-conflict’ locales across South and Southeast Asia, the Middle East and West Africa, ring true. They will hopefully trigger some alarm bells.

Meha Dixit’s book provides a nuanced perspective on conflict resolution. It examines significant questions of the politics of war and the relevance of peace. Thus, it is an engrossing read.