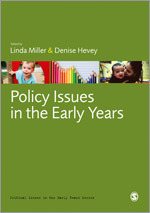 Share
Other Titles in:
Early Childhood Education | Policy & Planning
January 2012 | 200 pages | SAGE Publications Ltd
Download flyer
Providing a unique and critical insight into some of the most significant issues affecting Early Years Policy, this book has chapters from leading authorities and researchers in the field and draws on current research, addresses key debates and considers international perspectives.

- the marketisation of early years provision

- democracy as a fundamental value in Early Years

Taking a critical perspective and written in an accessible style, the book is relevant to all levels of Early Years courses, from Foundation Degree to Masters. The reader is encouraged to engage with debates and to develop their own views and opinions. With staggered levels of Further Reading, the editors and contributors provide a rich source of material that encourages reflection and promotes progression.

Denise Hevey is Professor of Early Years, The University of Northampton.

'Whether seen as a market commodity, a means of democratic empowerment, or the best start for all children, early years services reflect national values and political judgements. Policy making is relevant to all who work in early childhood care and education, and this book provides excellent insights and support to help practitioners develop the analytical skills that will make them "policy literate'

'A surprisingly accessible and interesting read, so if you want to feel more 'policy literate', and need to get 'clued up' on current issues affecting early years this book is the ideal read for you'
- Martine Horvath, Early Years Educator

'The contributors to the book are all well-informed protagonists in the field of early years who each offer unique perspectives on early years policy past, present, and future'
-Early Years Update

This book should provide a useful introduction to issues surrounding early years services and could be used in a range of courses, not only for those hoping to be early years practitioners but for all those professionals who work with families and young children.

A good read for students who may be researching how Policy affects practice in areas of health, social care and education. Children and families are affected by Policy and this book gives great information on a range of relevant topics.

The module covers Early Years Policy, Issues and Themes and very relevant and helpful for the students. It is one recommended on the module and reading list.

This text offers a range of policy issues for the students to contemplate. It develops similar ideas to the course and this makes it suitable for recommended reading.

A clear and well-laid out book that discusses policy making in the Early Years. I particularly like the differentiated reading tasks at the end of each chapter which helps ensure the subject is pitched at the correct level for each student.

An accessible book which covers key themes within early year’s policy and contemporary issues, which will be recommended to students on childhood and early education courses. A good source of information for supporting knowledge and understanding of the impacts of policy on the early year’s workforce. Contributions from respected authors in the field. The overview, summaries and case studies are particularly helpful.

An essential read for understanding how policy impacts the early years workforce and the wider environment of families, children, caregivers etc.

Particularly like the way that further reading is split into different levels. Really useful for students to ascertain what level of reading they will be accessing