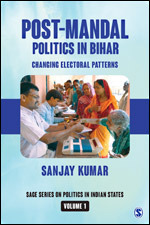 Bihar is politically one of the most significant states of India, with many politicians from this region being prominent in national politics. Post-Mandal Politics in Bihar presents a detailed account of Bihar’s electoral politics from the 1990s right up to the recent breakup of the RJD–JD(U)–Congress Grand Alliance. The book also traces the social and economic history of Bihar and the underlying reasons for its fragmented, caste-driven, and religion-driven politics. Additionally, it covers governance, leadership, and development, which are crucial factors in ensuring growth and prosperity of this state.

This is the first book in the SAGE Series on Politics in Indian States, which comprises volumes covering important trends in the politics of major states of India. It focuses on the electoral performance of various parties in the state and the changes party alliances have undergone.

The book focusses on electoral performance of parties and the changes alliances have undergone after Mandal.