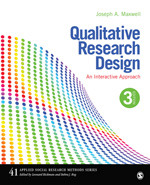 Share
Volume: 41
Series:
Applied Social Research Methods
Other Titles in:
Qualitative Evaluation | Qualitative Research (General) | Research Methods & Evaluation (General)
August 2012 | 232 pages | SAGE Publications, Inc
Download flyer
This book gives researchers and students a user-friendly, step-by-step guide to planning qualitative research. Based on a course that the author taught for 7 years at the Harvard Graduate School of Education, it is written in an informal, jargon-free style and incorporates many examples and hands-on exercises. Rather than the rigid, linear approach to design that is usually found in research methods textbooks--and which is particularly ill suited for qualitative research--this book presents a flexible, systemic model of design. This model not only better fits what experienced qualitative researchers actually do, but provides a clear framework for designing a study and developing a research proposal. This edition includes new or substantially expanded discussions of research paradigms, defining a research problem, site and participant selection, relationships with research participants, data analysis, and validity, as well as more examples and exercises.
Chapter 1. A Model for Qualitative Research Design
Chapter 2. Goals: Why Are You Doing This Study?
Chapter 3. Conceptual Framework: What Do You Think Is Going On?
Chapter 4. Research Questions: What Do You Want to Understand?
Chapter 5. Methods: What Will You Actually Do?
Chapter 6. Validity: How Might You Be Wrong?
Chapter 7. Research Proposals: Presenting and Justifying a Qualitative Study
Appendix A. A Proposal for a Study of Medical School Teaching
Appendix B. A Proposal for a Study of Online Learning by Teachers

“This book uses everyday language that will captivate students’ attention and embed practical knowledge to supplement the technical.”

“The key strengths of the text are the passion and the enthusiasm that Dr. Maxwell has for qualitative research after all these years. I feel I can also utilize these concepts on my own research team and take them out of the classroom and into research team meetings with colleagues.”

“I really liked this book. I found myself taking notes and saying “yes” so many times because Maxwell captures the research process so well and provides many points worth quoting. As a faculty mentor, I particularly see the value of this book for my students who are conducting qualitative dissertations.”

"Maxwell provides a clear explanation regarding the nuances involved in the circular process of qualitative research design."

Maxwell's book has been very helpful to my students to make a conceptual design for their research. They were asked to read the first 3 chapters carefully and make the Chapter 2 assignment. Some students had never thought about their qualitative research in this way. I adopted the book as reference, however I would have made it essential to the course if the price were more reasonable. I think 26 pounds would be acceptable.
Maxwell's book gives a common-sense approach to designing social research. I used it to provide a framework for integrating discourse analysis in social research.

Although a very good book, we cover more material than the focus of this book and we would have to adopt too many texts for our students.

A major impetus for a new edition of this book was the opportunity to expand it somewhat beyond the page limits of the earlier series on Applied Social Research Methods, for which it was originally written. However, many readers of the previous editions have said that they appreciated the conciseness of the book, so I didn't want to lose this virtue. Consequently, much of the new material in this edition consists of additional examples of my students' work, including a second example of a dissertation proposal (Appendix B).

Another impetus has been the ongoing development of qualitative research1, with a flourishing of new approaches, including arts-based approaches, to how it is conducted and presented. I haven't attempted to deal comprehensively with these, which would have ballooned the book well past what I felt was an appropriate length, as well as taking it beyond an introductory level. If you want to investigate these developments, the SAGE Encyclopedia of Qualitative Research (Given, 2008), the SAGE Handbook of Qualitative Research, 4th edition (Denzin & Lincoln, 2011) and the journal Qualitative Inquiry are good places to start. I've tried to indicate, in Chapters 1 and 3, how I see my approach to design as compatible with some of these developments, in particular with aspects of postmodernism and with the approach known as bricolage, and I have substantially rewritten and expanded my discussion of research paradigms, in Chapter 2.

However, I am also sceptical of some of these developments, particularly those that adopt a radical constructivist and relativist stance that denies the existence of any "reality" that our research attempts to understand, and that rejects any conception of "validity" (or related terms) that addresses the relationship between our research conclusions and the phenomena that we study. While I am enough of a postmodernist to believe that every theory and conclusion is our own construction, with no claim to "objective" or absolute truth, and argue in Chapter 2 that no theory can capture the full complexity of the things we study, I refuse to abandon the goal of gaining a better understanding of the physical, social, and cultural world in which we live, or the possibility of developing credible explanations for these phenomena.

This position is grounded in my third impetus for revising this book: my increasing awareness of how my own perspective on qualitative research has been informed by a philosophical realism about the things we study. I have developed this perspective at length in my book A Realist Approach for Qualitative Research (2011), arguing that the "critical realist" position I have taken is not only compatible with most qualitative researchers' actual practices, but can be valuable in helping researchers with some difficult theoretical, methodological, and political issues that they face. However, I offer this as a useful perspective among other perspectives, not as the single correct paradigm for qualitative research. As the writing teacher Peter Elbow (1973, 2006) argued, it is important to play both the "believing game" and the "doubting game" with any theory or position you encounter, trying to see both its advantages and its distortions or blind spots. For this reason, I want the present book to be of practical value to students and researchers who hold a variety of positions on these issues. The model of qualitative research design that I develop here is compatible with a range of philosophical perspectives, and I believe it is broadly applicable to most qualitative research.

My greater awareness of the implications of a critical realist stance have led me to revise or expand other parts of the book—in particular, the discussion of theory in Chapter 3; developing (and revising) research questions in Chapter 4; research relationships and ethics, developing interview questions, and data analysis, in Chapter 5; the concept of validity in Chapter 6; and the appropriate functions and content of a literature review in a research proposal, in Chapter 7. I've also continued to compulsively tinker with the language of the book, striving to make what I say clearer. I would be grateful for any feedback you can give me on how the book could be made more useful to you.

Finally, I realized in revising this work that I had said almost nothing explicitly about how I define qualitative research—what I see as most essential about a qualitative approach. I say more about this in Chapter 2. However, a brief definition would be that qualitative research is research that is intended to help you better understand 1) the meanings and perspectives of the people you study—seeing the world from their point of view, rather than simply from your own; 2) how these perspectives are shaped by, and shape, their physical, social, and cultural contexts; and 3) the specific processes that are involved in maintaining or altering these phenomena and relationships. All three of these aspects of qualitative research, but particularly the last one, contrast with most quantitative approaches to research, which are based on seeing the phenomena studied in terms of variables—properties of things that can vary, and can thus be measured and compared across contexts. I see most of the more obvious aspects of qualitative research—its inductive, open-ended approach, its reliance on textual or visual rather than numerical data, its primary goal of particular understanding rather than generalization across persons and settings—as due to these three main features of qualitative inquiry. (For a more detailed discussion of these issues, see Maxwell, 2011b.)

1. Some qualitative practitioners prefer the term "inquiry" to "research," seeing the latter as too closely associated with a quantitative or positivist approach. I agree with their concerns (see Maxwell, 2004a, b), and I understand that some types of qualitative inquiry are more humanistic than scientific, but I prefer to argue for a broader definition of "research" that includes a range of qualitative approaches.