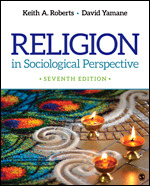 Religion in Sociological Perspective introduces students to the systems of meaning, structure, and belonging that make up the complex social phenomena we know as religion. Authors Keith A. Roberts and David Yamane use an active learning approach to illustrate the central theories and methods of research in the sociology of religion and show students how to apply these analytical tools to new groups they encounter.

The Seventh Edition departs from previous editions by emphasizing that the sociology of religion is an ongoing conversation among scholars in dialogue with existing scholarship and the social world. This perspective is established in the new second chapter, “Historical Development of the Sociology of Religion.” Other chapters feature important voices from the past alongside the views of contemporary sociologists, and conclude with a glimpse of where the sociology of religion might be heading in the future. At every opportunity, the text has been enriched by research and examples that are meant to challenge parochial limits in the sociology of religion, pushing beyond Christianity, congregations, beliefs, national borders (especially the United States), and even beyond religion itself (to take nonreligion more seriously).

SAGE edge for instructors supports your teaching by making it easy to integrate quality content and create a rich learning environment for students with:

The Sociology of Religion