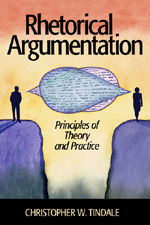 Share
Other Titles in:
Negotiation and Conflict Resolution | Philosophy (General) | Rhetoric & Rhetorical Theory
July 2004 | 224 pages | SAGE Publications, Inc
Download flyer
The study of argumentation has primarily focused on logical and dialectical approaches, with minimal attention given to the rhetorical facets of argument. Rhetorical Argumentation: Principles of Theory and Practice approaches argumentation from a rhetorical point of view and demonstrates how logical and dialectical considerations depend on the rhetorical features of the argumentative situation. Throughout this text, author Christopher W. Tindale identifies how argumentation as a communicative practice can best be understood by its rhetorical features.

Rhetorical Argumentation uniquely presents argumentation through the idea of an invitational rhetoric by encouraging readers to think about the ways in which they encounter arguments. The book explores the processes involved in the argumentative exchanges between arguers and audiences-thus, emphasizing the collaborative nature of the arguer-audience relationship in the argumentative situation. That is, argument is presented not as a set of ideas imposed upon a passive audience, but rather as a dynamic exchange wherein the audience is involved in self-persuasion.

Explores the ancient foundations of rhetoric, from Aristotle to the relatively contemporary works of Perelman and Olbrechts-Tytecta, Toulmin, and Bakhtin

Provides detailed discussions of topics such as nature of the dialogical, rhetorical context, audiences, and standards of appraisal.

Rhetorical Argumentation is designed to provide advanced undergraduate and graduate students with a clear understanding of the rhetorical view of argumentation and how it can be effective in contemporary society. The book is an ideal text for courses in Communication, Rhetoric, Argumentation, Informal Logic, Critical Thinking, and Conflict Resolution.

This is a great book with wonderful information. It is easy to read and would be beneficial to students. This text would work well with certain approaches to argumentation courses.

Chpater. 1. A Rhetoric Turn for Argumentation

Chapter 3. ... And Rhetoric as Argumentation

Journal of Language and Social Psychology