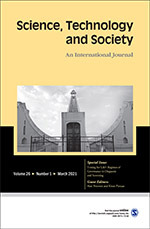 Science, Technology & Society enhances our understanding of the way in which advances in science and technology influence society and vice versa. Launched in 1996, it is the first truly international journal devoted to the developing world and published from the region. It covers areas like history, sociology, philosophy, economics, political science, psychology, technological forecasting, science policy, R & D management, health & nutrition, agriculture, ecology & environment, and quantitative studies.

"…Despite its high standard of scholarship, the journal is designed to be accessible to a broad range of scientists working in R&D fields. It should be on the essential reading lists of all scientists with an interest in developing countries". - NATURE

This journal is a member of the Committee on Publication Ethics (COPE).

Science, Technology and Society is an international journal devoted to the study of science and technology in social context. It focuses on the way in which advances in science and technology influence society and vice versa. It is a peer-reviewed journal that takes an interdisciplinary perspective, encouraging analyses whose approaches are drawn from a variety of disciplines such as history, sociology, philosophy, economics, political science and international relations, science policy involving innovation, foresight studies involving science and technology, technology management, environmental studies, energy studies and gender studies. The journal consciously endeavors to combine scholarly perspectives relevant to academic research and policy issues relating to development. Besides research articles the journal encourages research-based country reports, commentaries and book reviews.

SAGE is committed to upholding the integrity of the academic record. We encourage authors to refer to the Committee on Publication Ethics’ International Standards for Authors and view the Publication Ethics page on the SAGE Author Gateway

To purchase a non-standard subscription or a back issue, please contact SAGE Customer Services for availability.