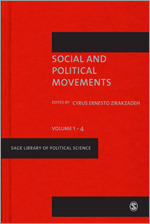 Share
Series:
SAGE Library of Political Science
Other Titles in:
Cultural Politics | Politics (General) | Social Theory
January 2011 | 1 640 pages | SAGE Publications Ltd
Download flyer
'Social movements' refer to purposeful undertakings by people who do not hold positions of authority or wealth, but who wish to redirect their society towards new goals and values by bypassing or defying those in power. Scholarly opinions about such movements vary tremendously. Some - especially those with painful first-hand experiences of fascist regimes - fear movements, cite their extra-constitutional features, and predict authoritarian consequences if unauthorized collective actions become more common. Others - for instance those who sympathize with recent peace, environmental, or women's movements - admire and applaud social movements, viewing them as schools for healthy citizenship.

This collection contains more than 55 writings by academics and public intellectuals. The essays are drawn from different decades of the 20th and 21st centuries, and from across the globe, presenting different and sometimes divergent lines of thinking about social movements.

Volume One: Theorizing about Movements after World War II

The Politics of Postmodernity