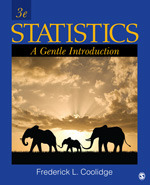 With Statistics: A Gentle Introduction, Third Edition, an introductory stats class needn't be difficult or dull! This textbook has been specifically designed to curtail students' anxieties and minimize unnecessary formulas, while providing a comprehensive review of basic statistical designs and analyses. A wealth of additional real-world examples have been included to give a sense of how the science of statistics works, solves problems, and helps us make informed choices about the world we live in. The author minimizes the use of formulas, but provides a step-by-step approach to their solution, and includes a glossary of key terms, symbols, and definitions at the end of each chapter. Every chapter also includes a short story about historical and contemporary statisticians who figured prominently in the evolution of the discipline of statistics.

New to the Third Edition is the thorough incorporation of SPSS throughout, more visual material and figures, and an enhanced treatment of effect sizes, and more detailed explanation of statistical concepts.

”The approach is ‘right on’–making statistics approachable and learnable, rather than a barrier to a student’s further education.”

Gerry Dizinno
The University of Texas at San Antonio

“It is a very engaging book which incorporates humor along with clear presentation of statistical concepts. It is not as intimidating as some other texts. It incorporates research methods concepts skillfully.”

“The author provides practical application of statistics to real problems to be solved.”

“I think the author did a great job for updating his textbook. I believe that the last edition was a fairly friendly textbook for students in undergraduate introductory statistics, but the update makes this textbook even friendlier.”

“I like the conversational writing style and fascinating examples. The background information about important figures in the history and development of statistics separates this text from most others. The SPSS instructions are clear and easy to follow and the interpretation of the SPSS output is excellent.”

A good book for helping students to develop their understanding and application of statistics although it may still be too complex for some undergraduate nurses.

Simple to read, good examples used in the book

Does what it says on the cover, a helpful text for statistics wary students

For the first time, I have incorporated the Statistical Package for the Social Sciences (SPSS) software into the textbook. There are also many more tables, figures, diagrams, and pictures throughout the manuscript. There is enhanced treatment of effect sizes, and I have sharpened some of the theoretical points about statistical concepts. My students and I have corrected errors that were in the second edition, and I have included many of the suggestions and comments of the dedicated and careful reviewers of the drafts of the third edition. Specific changes to the chapters include the following:

· Chapter 1: The section on the data scales used in empirical measurement (nominal, ordinal, interval, and ratio) has been updated. The chapter also begins the SPSS lesson by covering such basic functions as opening the program, creating data files, changing variable display format, and so on.

· Chapter 2: The section on "chart junk" has been expanded, and an SPSS lesson on frequency distributions, bar charts and histograms, skewness and kurtosis, and describing data has been added.

· Chapter 3: The explanation on calculating the correct theoretical median when there is an even number of identical scores in the set has been amplified and refined, as has the section on using standard deviations for predictions. The SPSS lesson for this chapter encompasses measures of central tendency and variation statistics.

· Chapter 4: The section on using z distributions to text experimental hypotheses has been refined, and an SPSS lesson on converting raw scores to z scores and z scores to T scores has been added.

· Chapter 5: This chapter has been updated to address the reporting standards of the American Psychological Association (APA) for effect sizes and confidence intervals. APA guidelines for the interpretation and reporting of trends has also been added, as has a mention of the issues surrounding Null Hypothesis Significance Testing (NHST). The SPSS lesson for this chapter addresses cases, variables, and analysis conditions.

· Chapter 6: The revisions to this chapter refine the explanations of levels of significance, abuse of power, and interpreting scatterplots. The SPSS lesson for this chapter covers the Pearson product-moment correlation coefficient and scatterplots.

· Chapters 7 and 8: These null and alternative hypotheses for these chapters have been updated with more intuitive versions of their subscripts and explanations of those subscripts. There is an expanded explanation of the steps needed to determine significance for t tests. A measure of effect size, Cohen's d, has been added, as has Cohen's recommended guidelines for interpreting Cohen's d. The SPSS lessons for these chapters cover t tests for independent and dependent groups.

· Chapter 9: The explanation for determining the degrees of freedom has been refined, and the explanation of Type I error has been expanded. A measure of effect size, omega-squared, has been added, as has Cohen's recommended guidelines for interpreting omega-squared. The section on the theoretical outcome of the derived F value if the null hypothesis is true has been refined. Alternative names used for the 1-factor completely randomized analysis of variance (ANOVA) test have been provided, and the SPSS lesson for this chapter shows how to perform this test.

· Chapter 14: The test material for Chapter 14 has been updated for accuracy. The SPSS lesson shows how to perform ANOVA tests for the split plot and 2-factor repeated measures design.

· Chapter 15: The section on reporting chi-square has been expanded, and the accompanying SPSS lesson details the performance of the chi-square test.

· Chapter 16: This chapter has been revised for accuracy and updated for currency.

Integrative Statistics for the Social and Behavioral Sciences